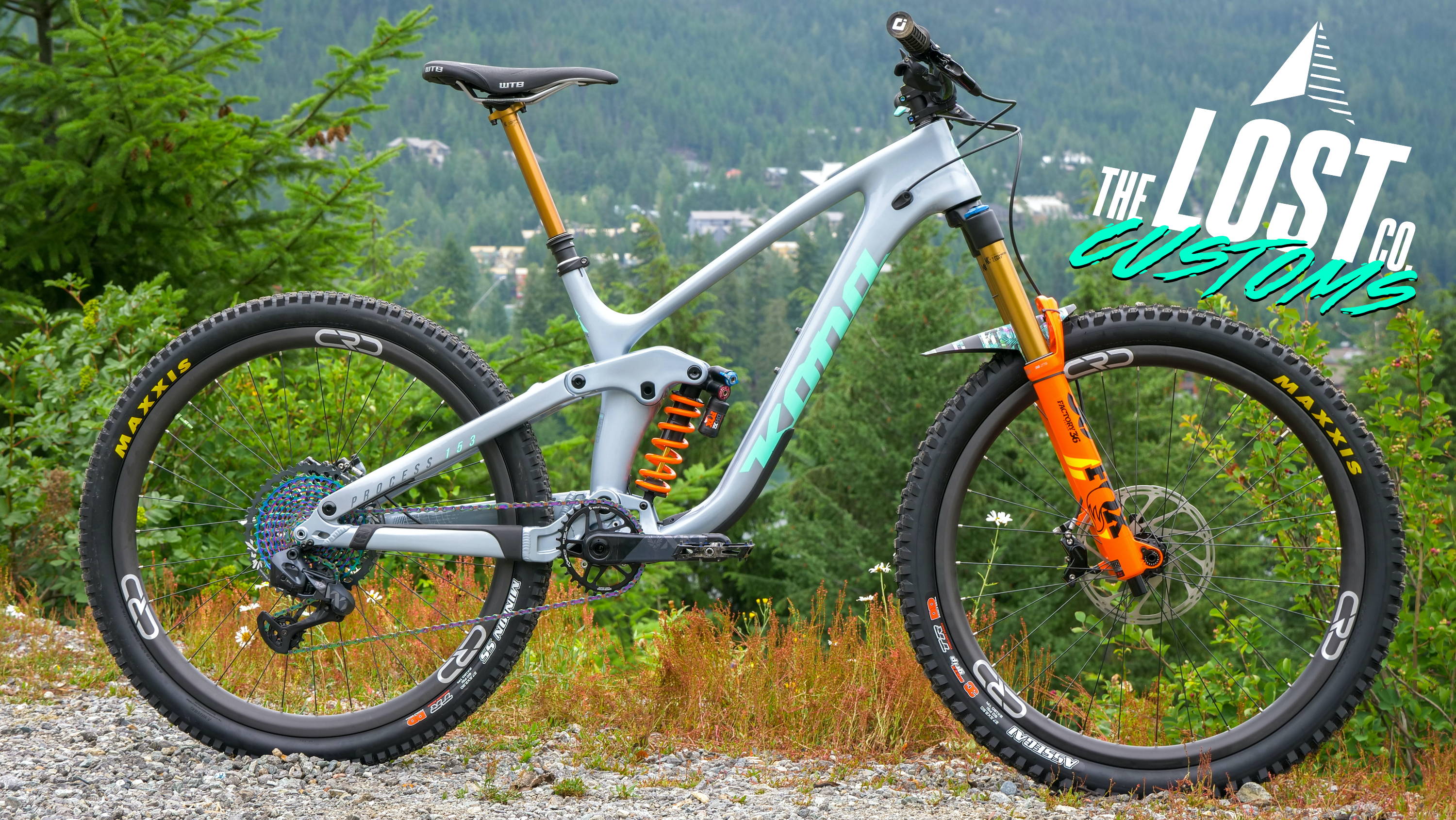 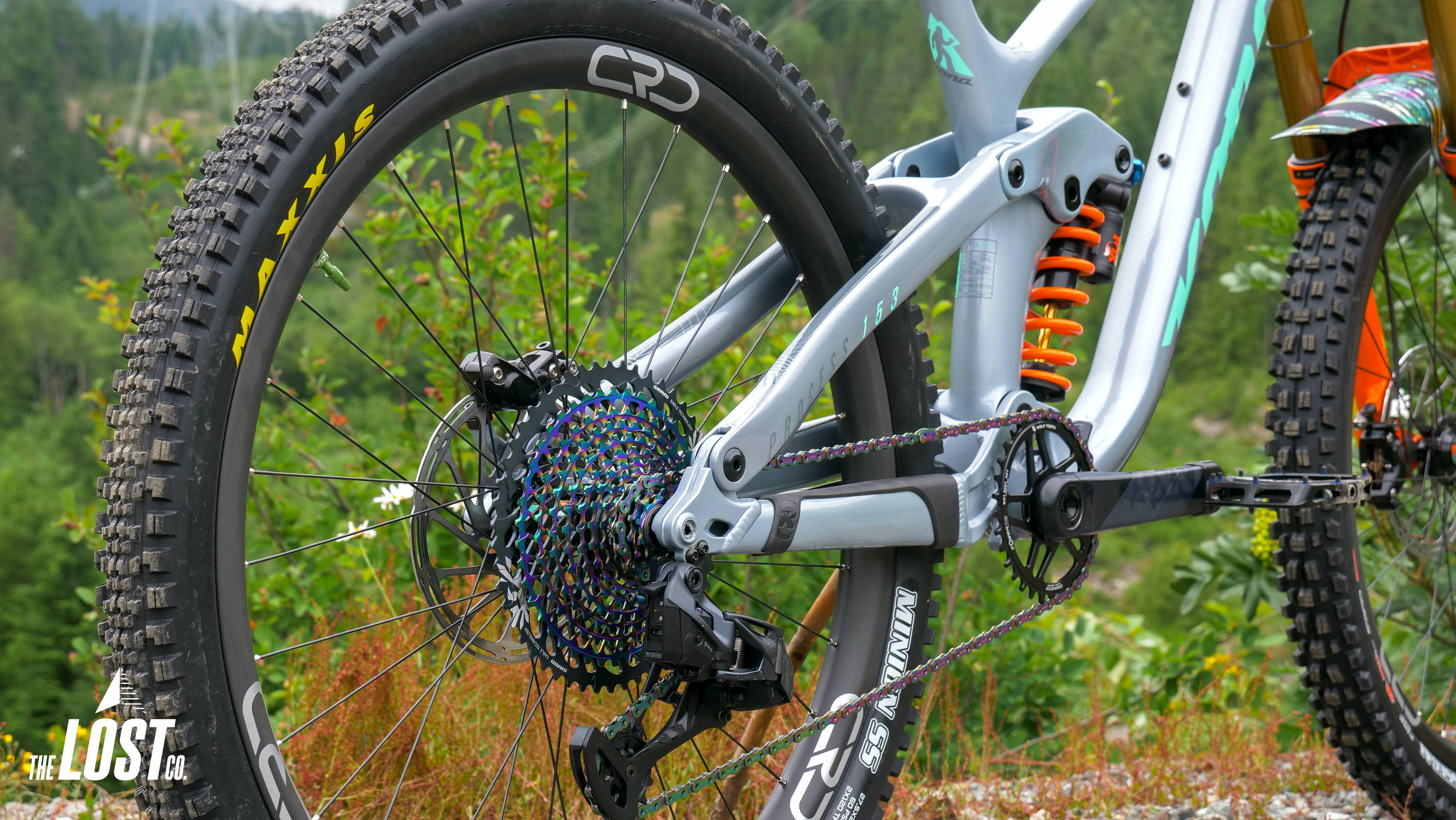 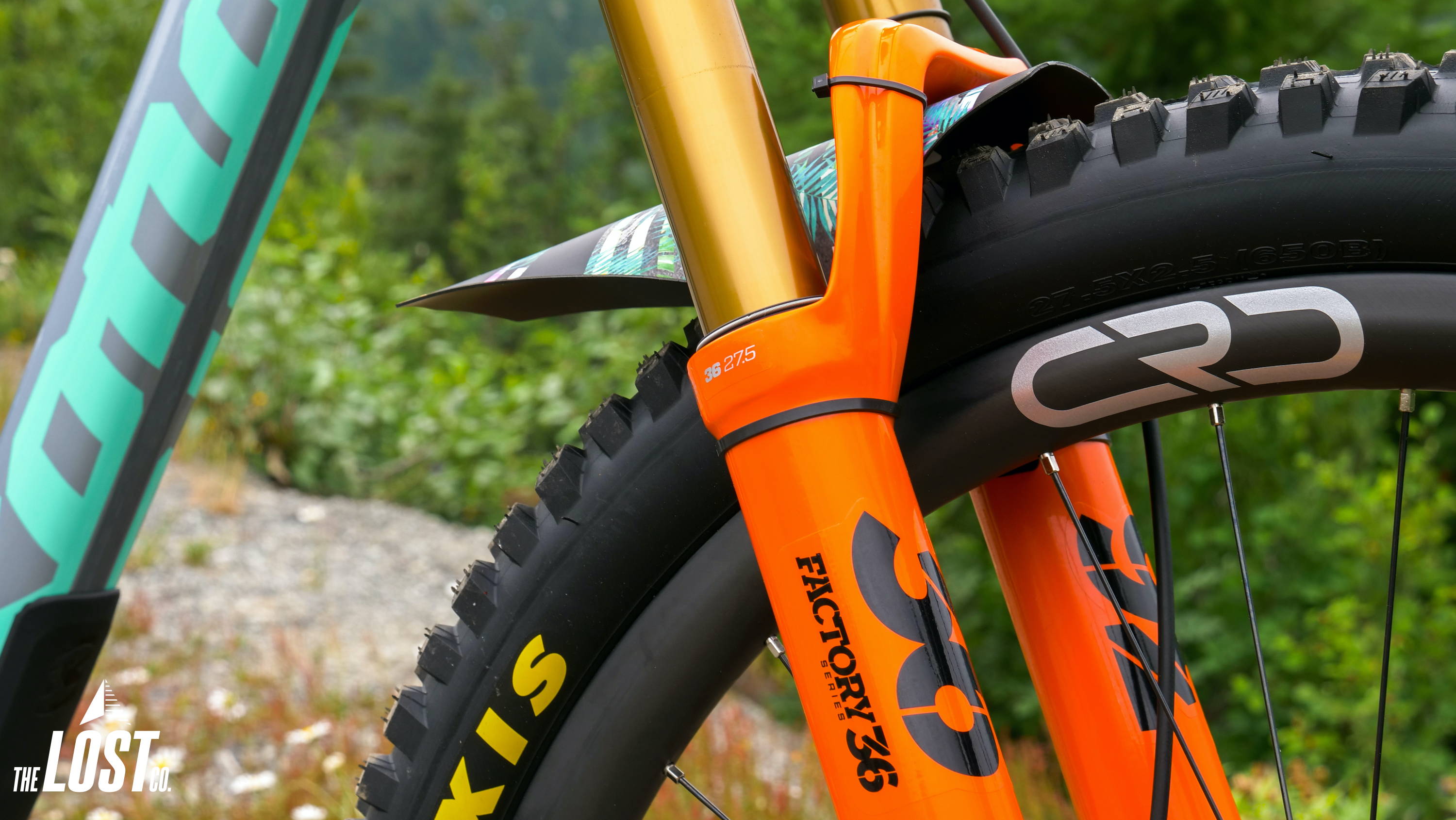 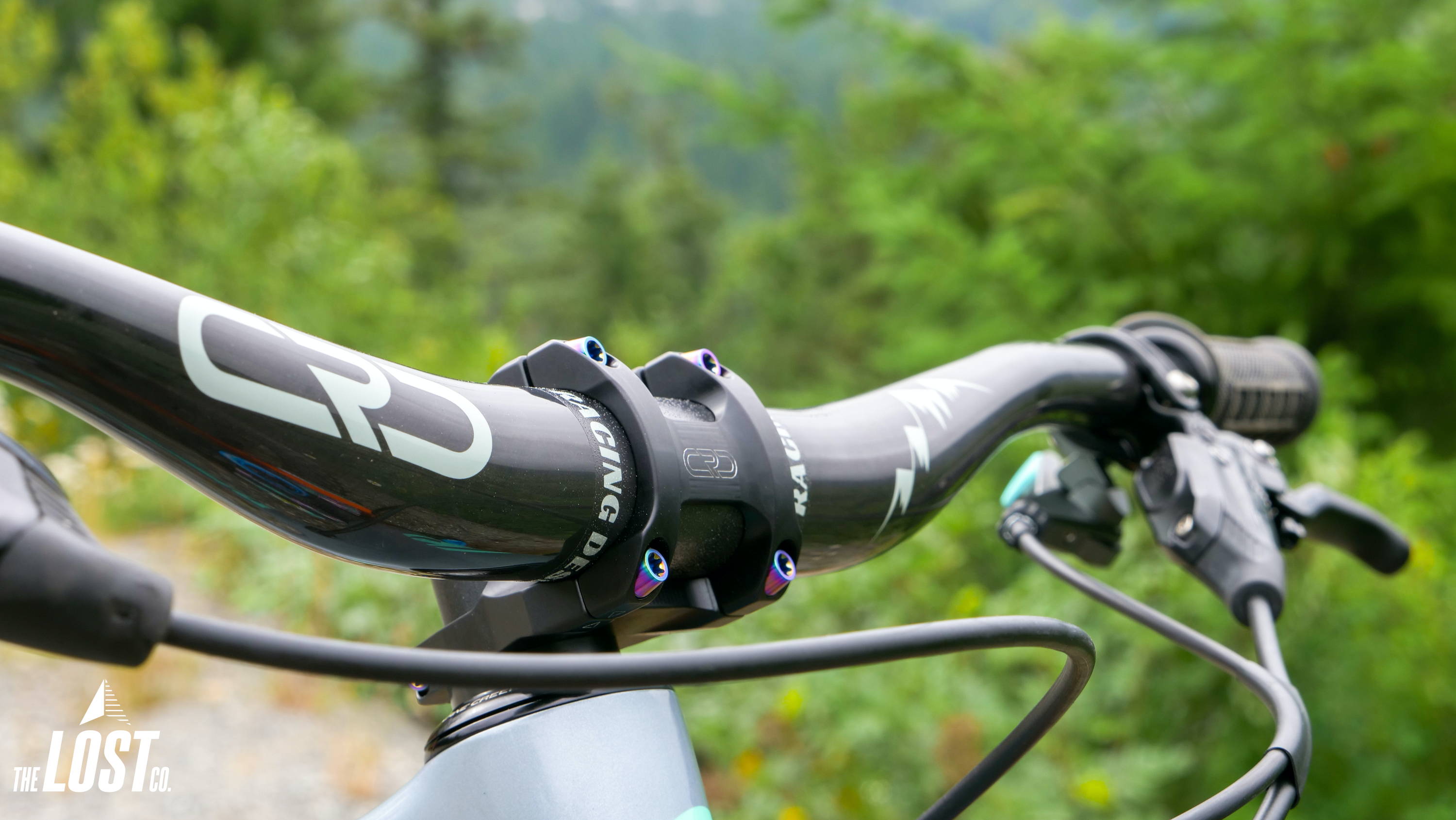 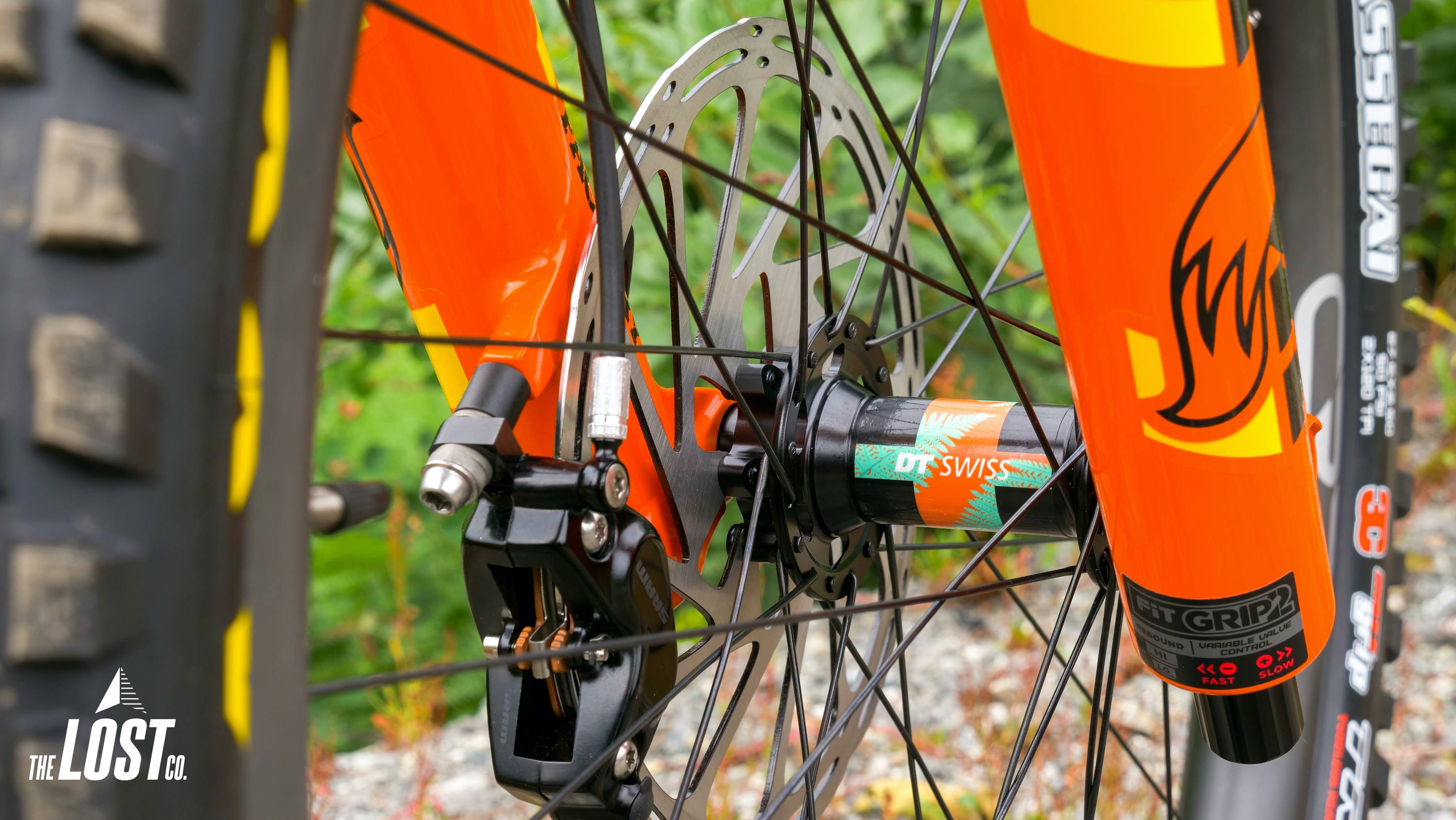 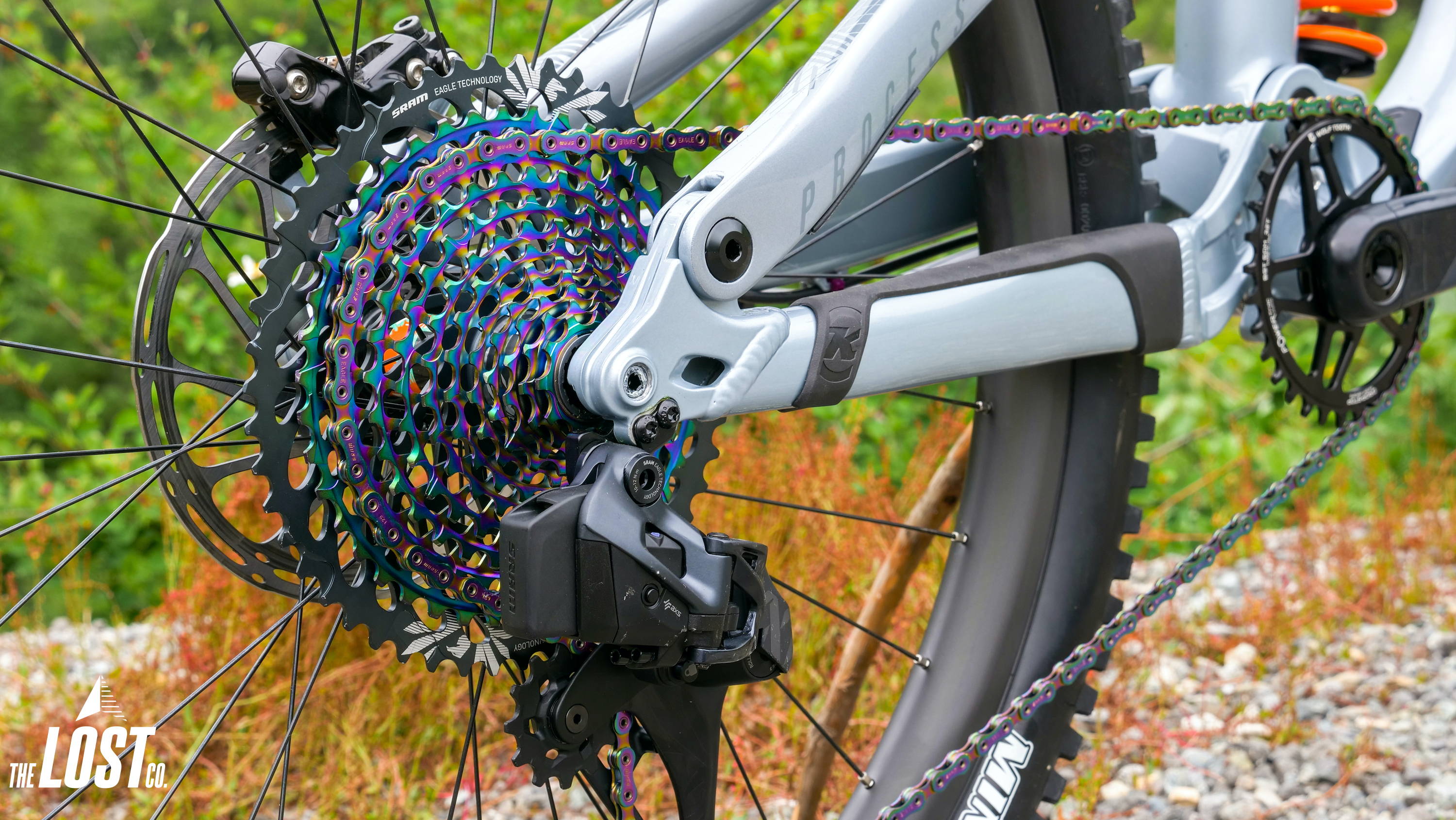 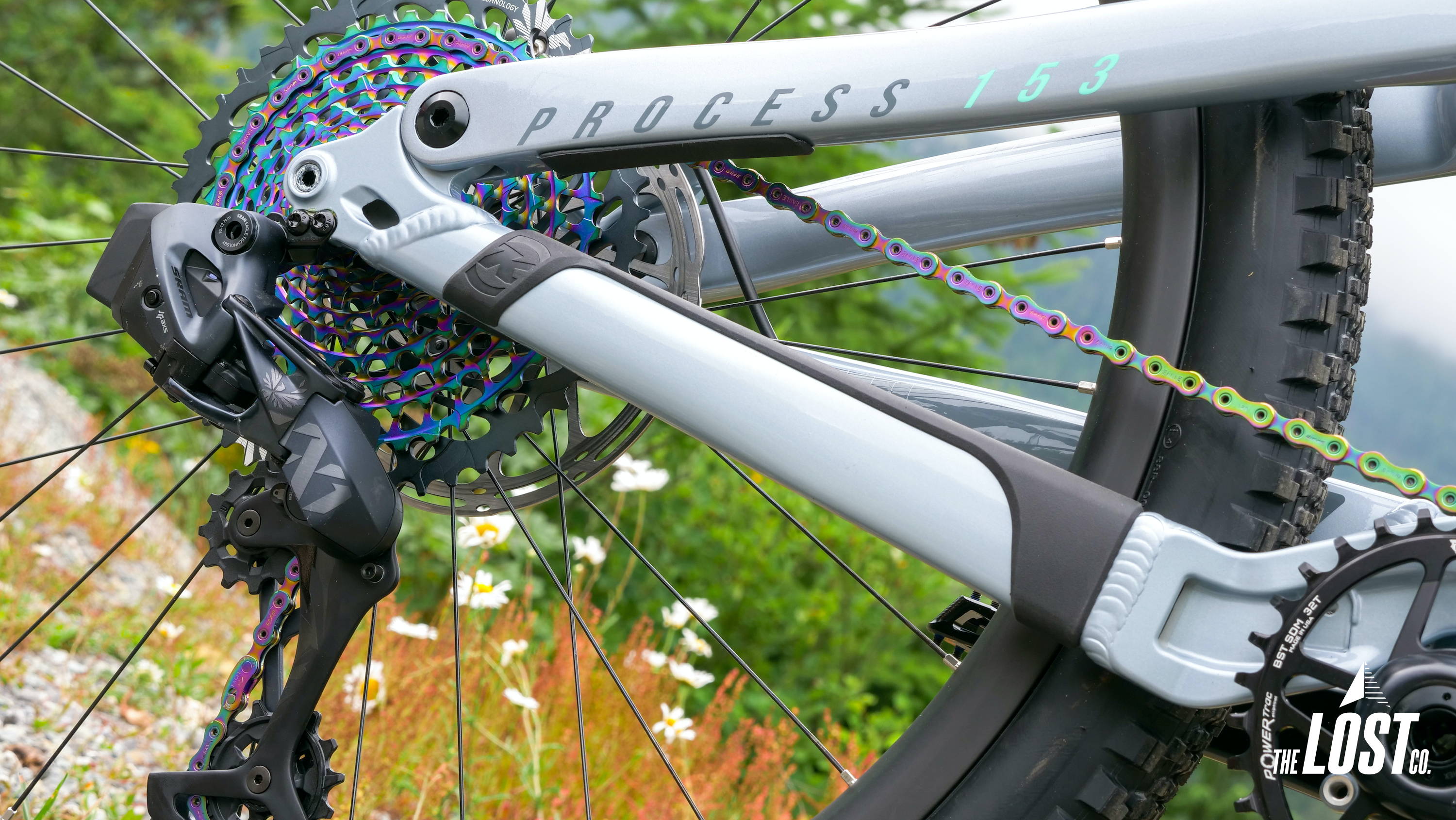 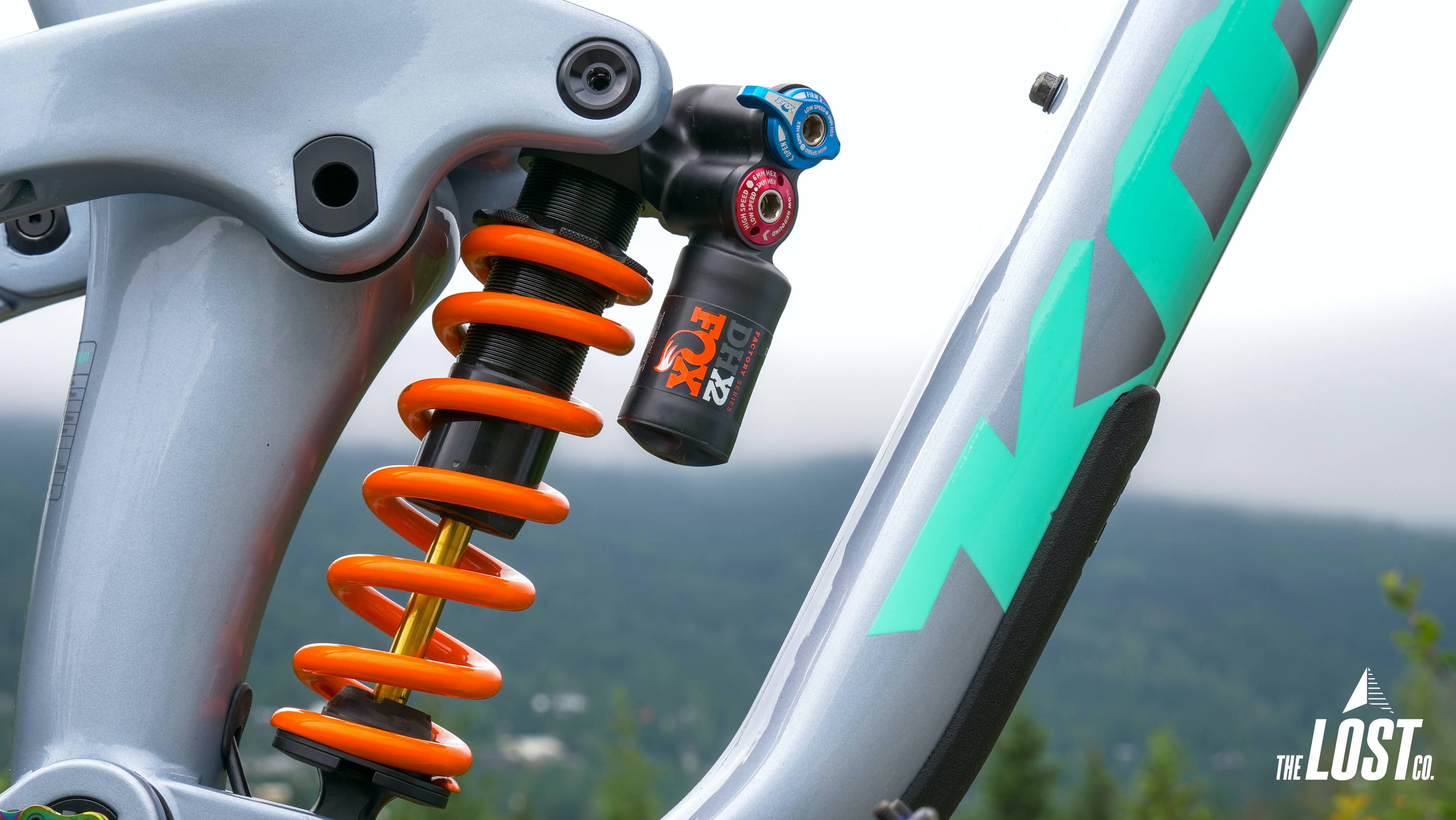 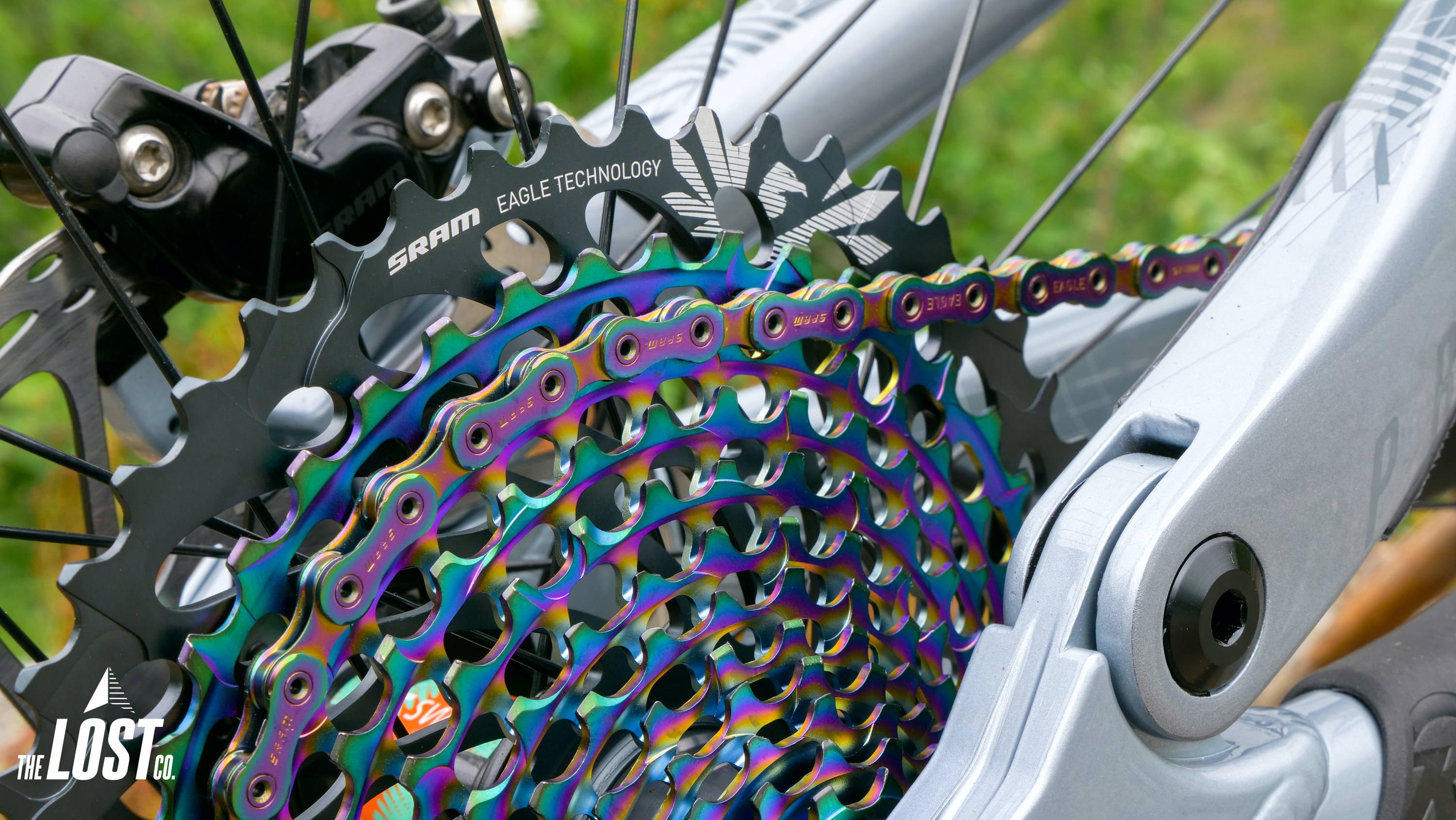 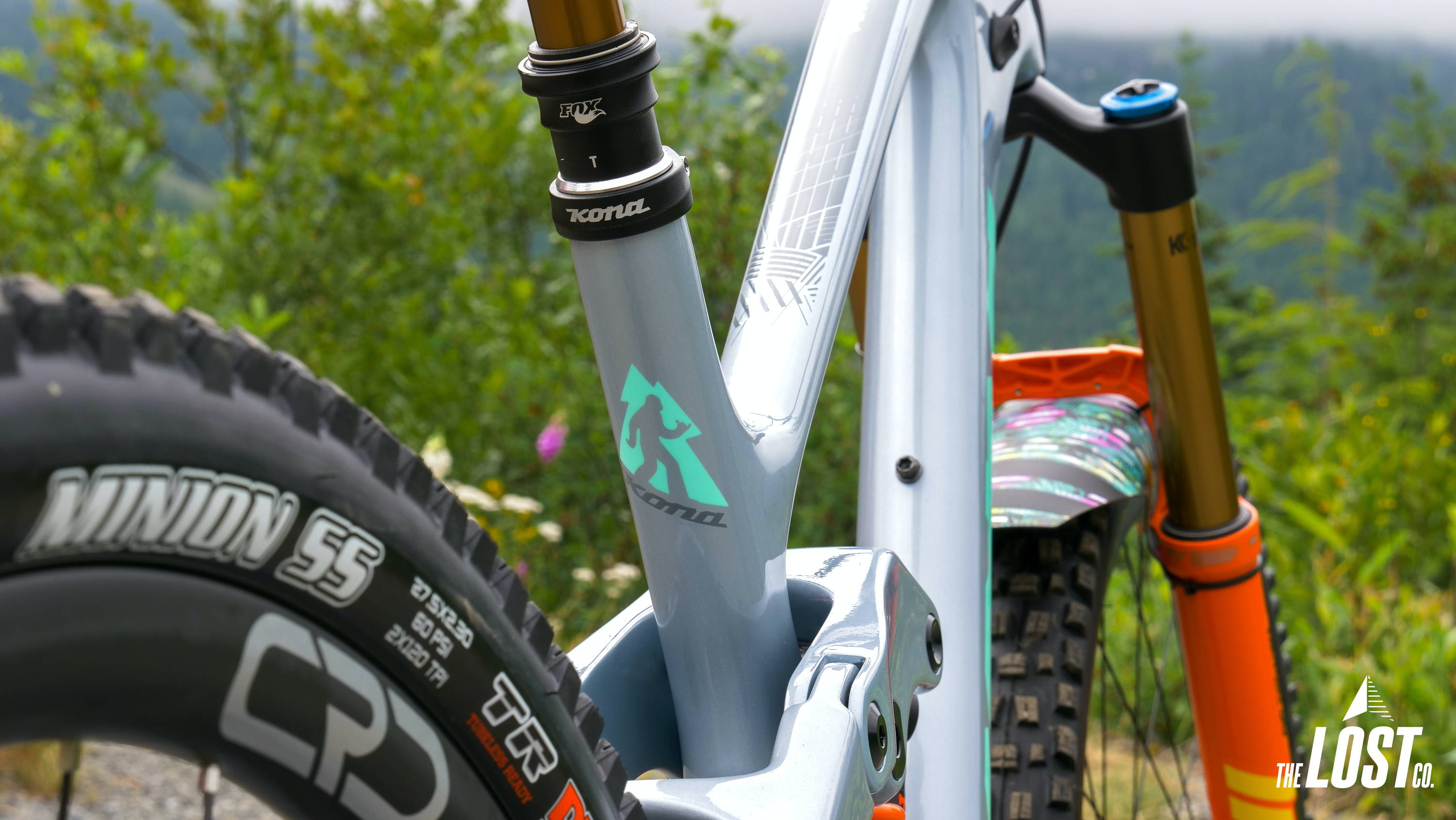 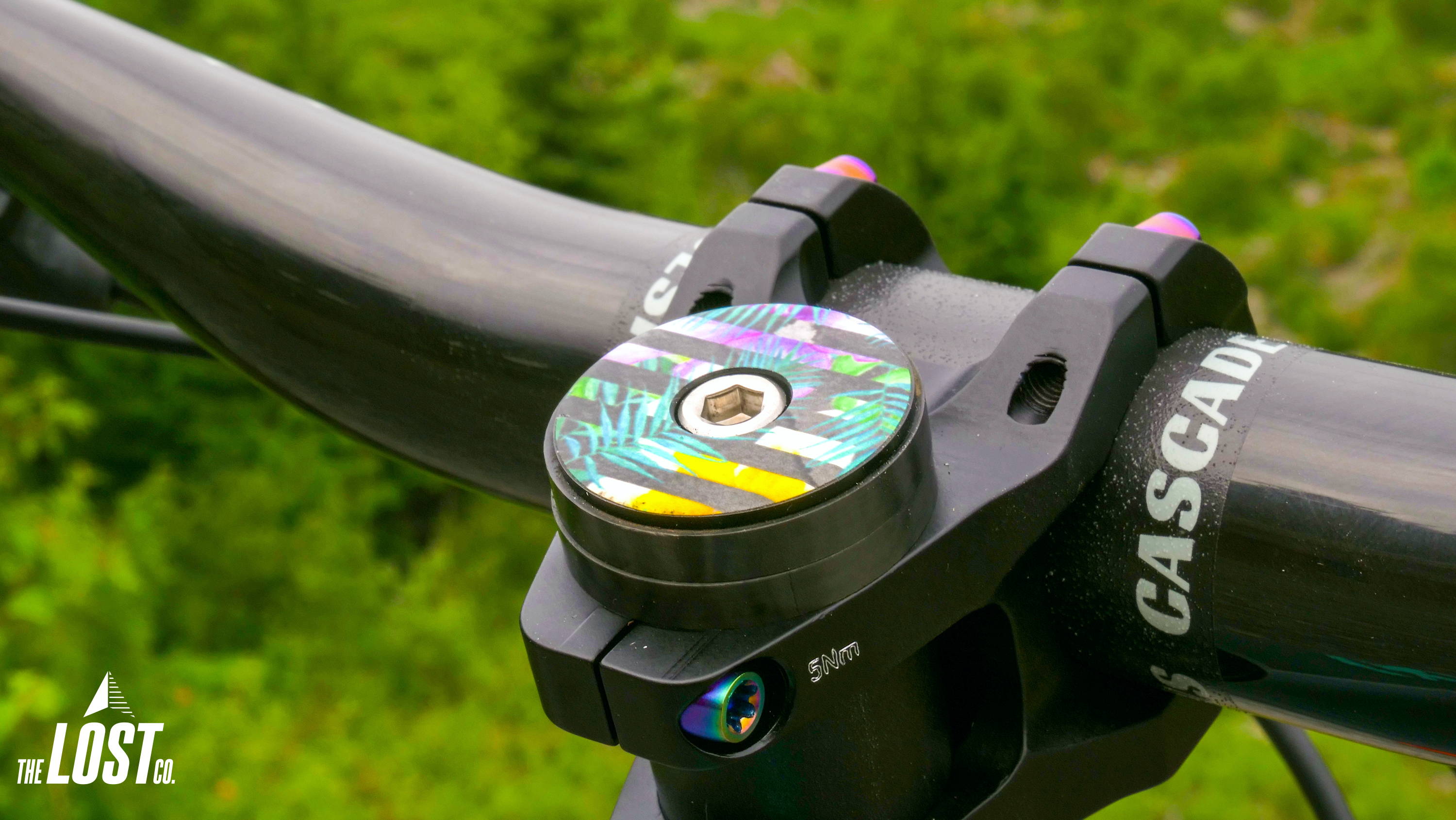 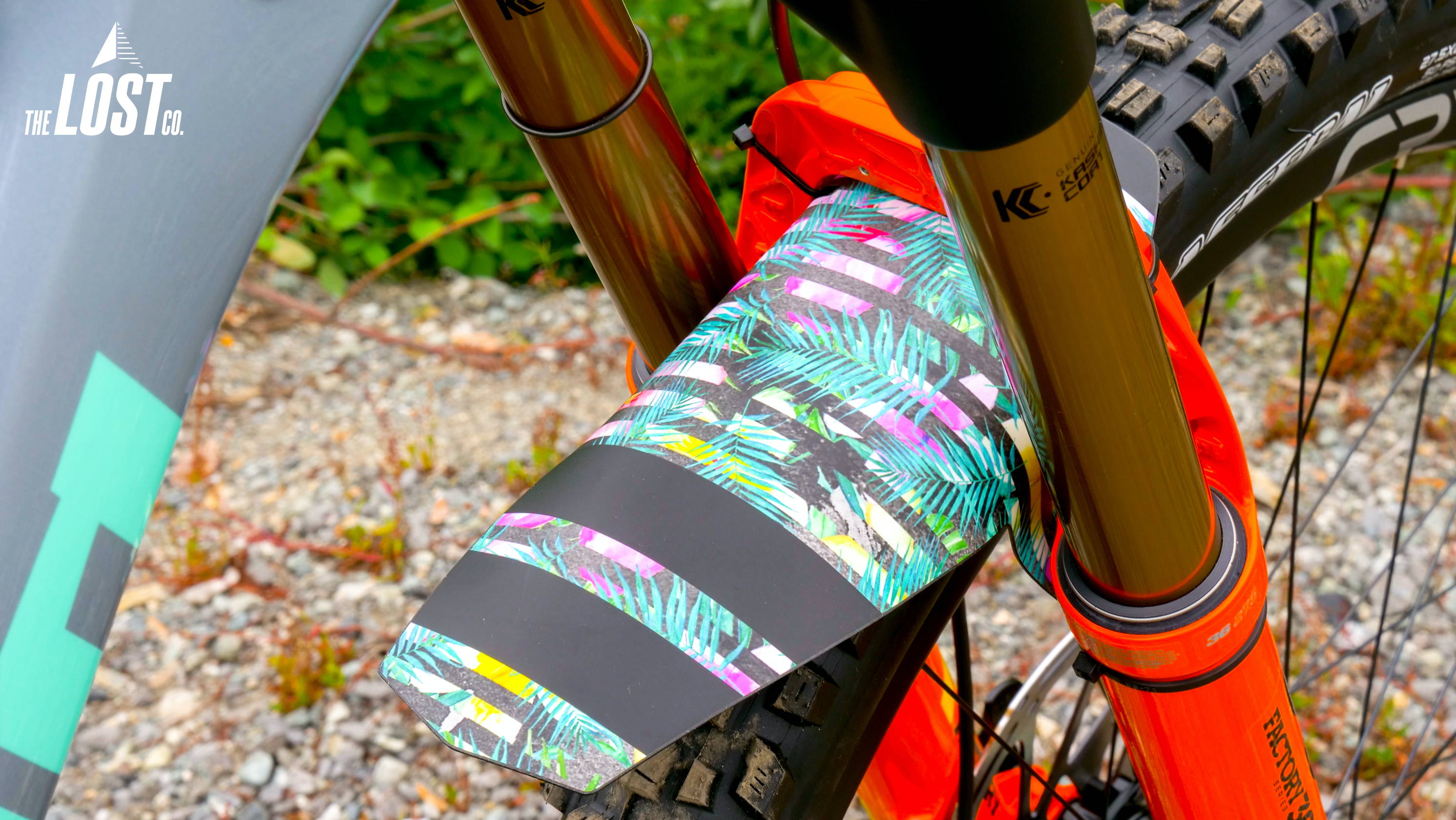 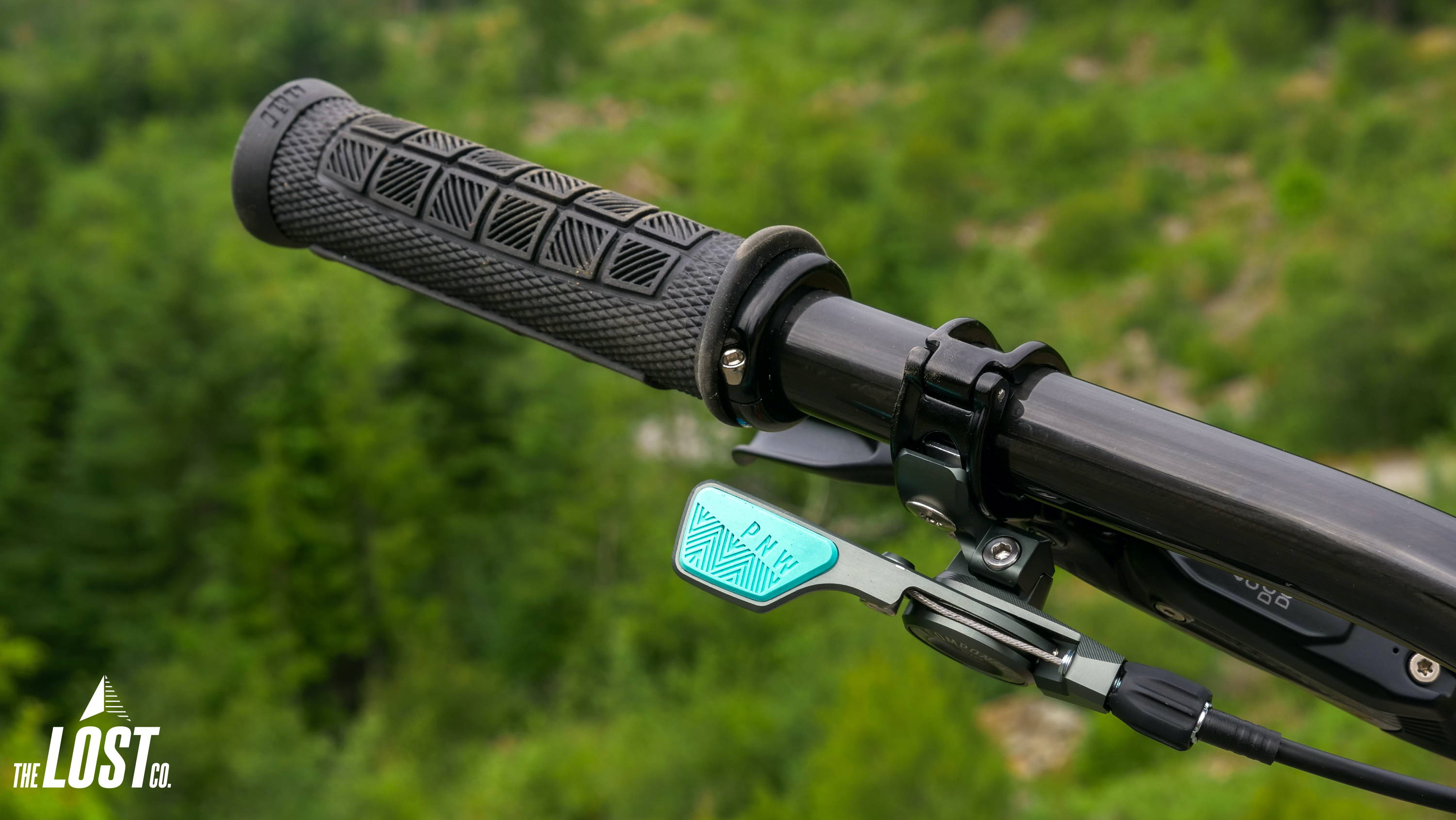 This custom Kona Process 153 CR DL 275 belongs to Mike, the owner of The Lost Co. This beast was built for long days of pedaling, shuttling or chairlift-ing to the top of gnarly descents. This is straight up a downhill bike that you can still pedal around and have fun on. Mike isn't the world's tallest man at 5'7" and prefers 27.5" wheels and low standover height, both of which are offered on the Process 153. With an air shock, the Process 153 is extremely poppy and playful, so Mike thought this was the perfect setup for a coil shock. Mike chose to ran the DHX2 out back to handle tons of chunky, rocky and rooty terrain and keep the rear end a little more glued to the ground. This combined up front with the Fox Factory 36 set at 170mm slightly slacked out the head angle and provided a super stiff front end feel. The GRIP2 damper paired with the DHX2 out back provided the ultimate amount of suspension settings. This enabled the bike to retain that active and poppy suspension characteristic but with a little more traction.

Russ (Lost Co head mechanic) built up Mike a set of burly yet light carbon wheels composed of CRD (Cascade Racing Designs) rims, laced to DT Swiss 240 hubs with Wheelsmith 1.7 double-butted spokes. That rim/spoke/hub combo created a ride that is just the right amount of stiffness and snappy-ness. You'll also notice Mike slapped some custom hubs decals on to match the rest of the bike with teal ferns and orange logos. Bling Bling!! Wrapped around those carbon hoops are a pair of Maxxis Double Down tires, with the Assegai up front in MaxxGrip rubber and out back there's a Minion SS semi-slick tire with Dual Compound rubber to keep these rolling fast. The rear tire is stuffed with a CushCore for a little added rim protection in the rocky Canadian trails and provide extra grip since less air pressure needs to be ran. 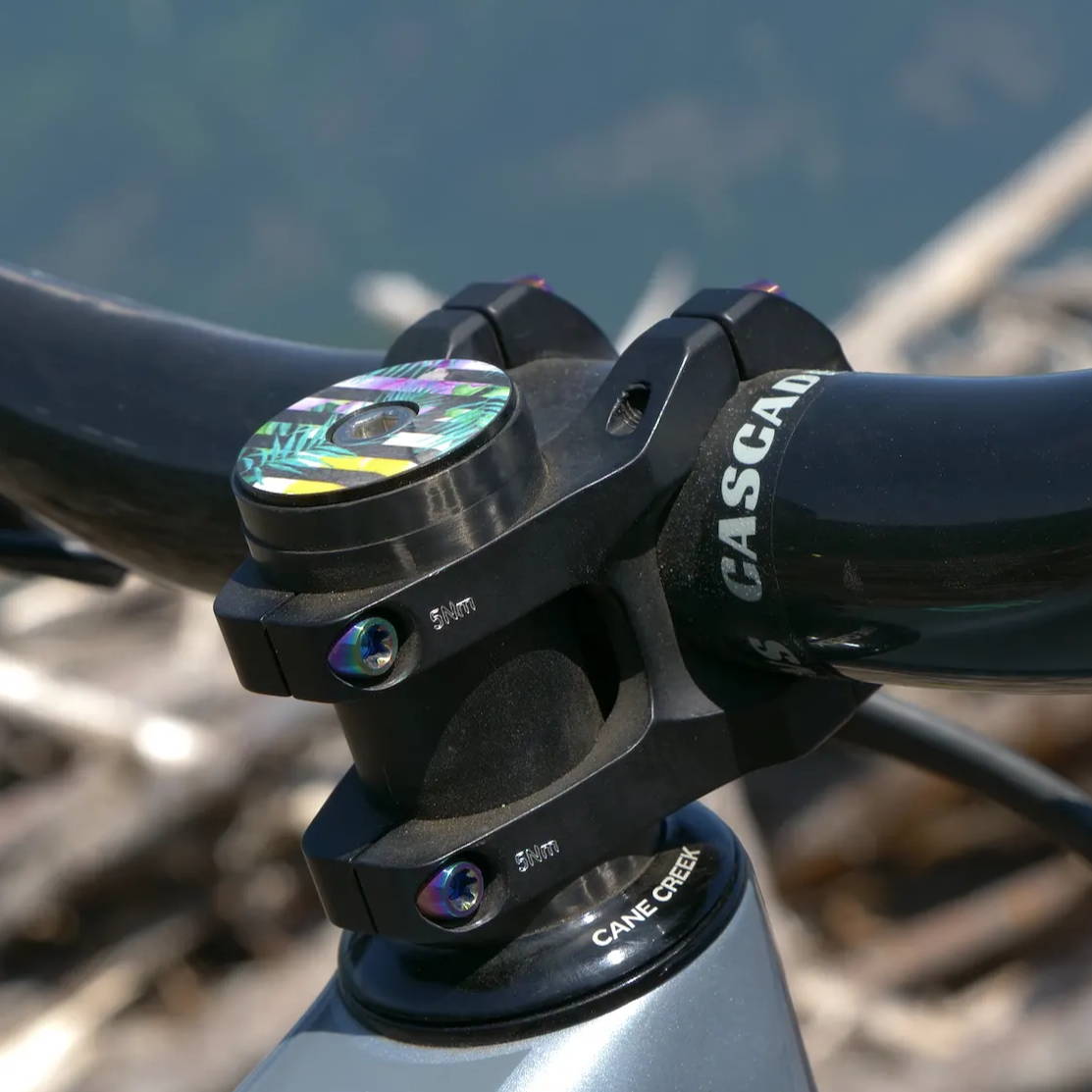 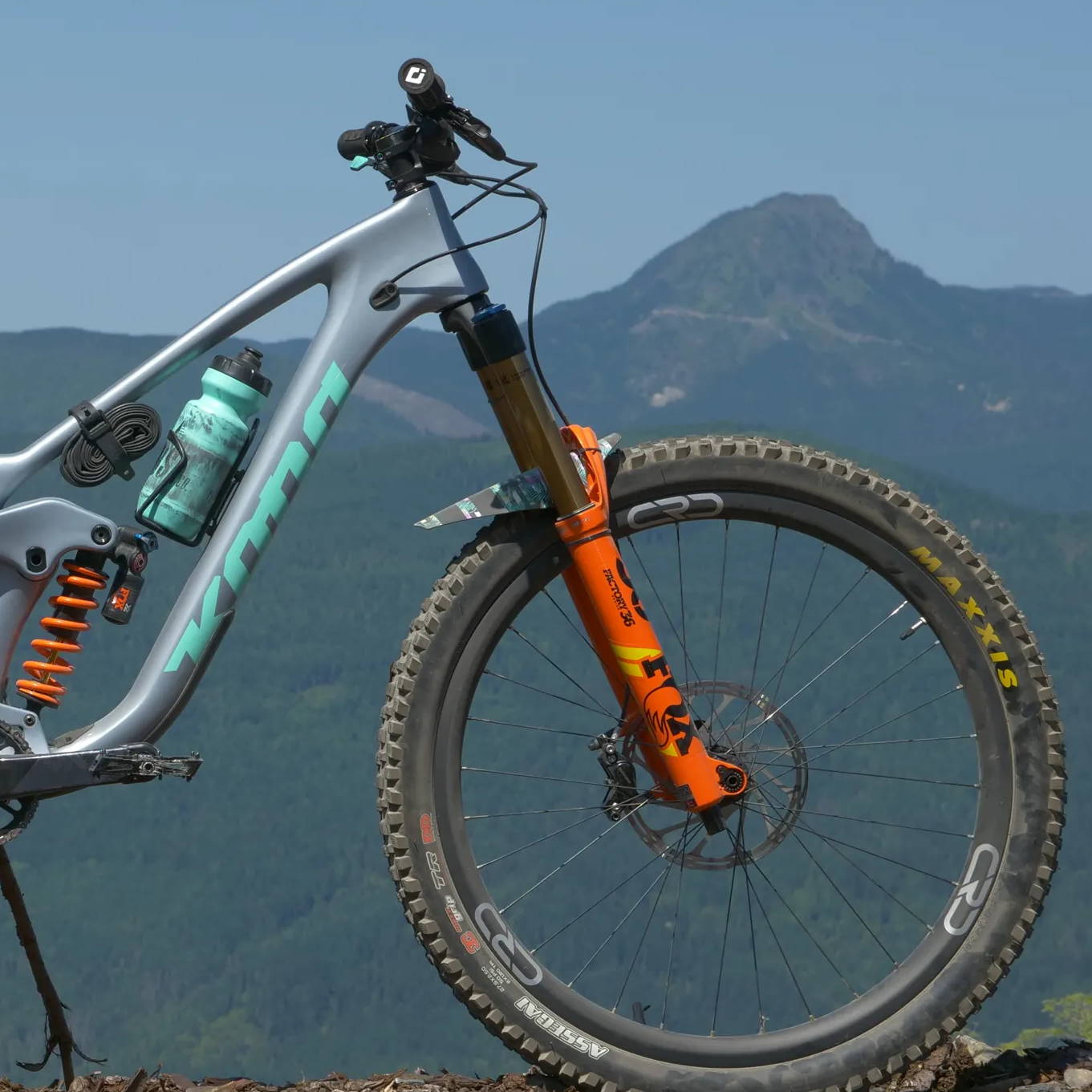 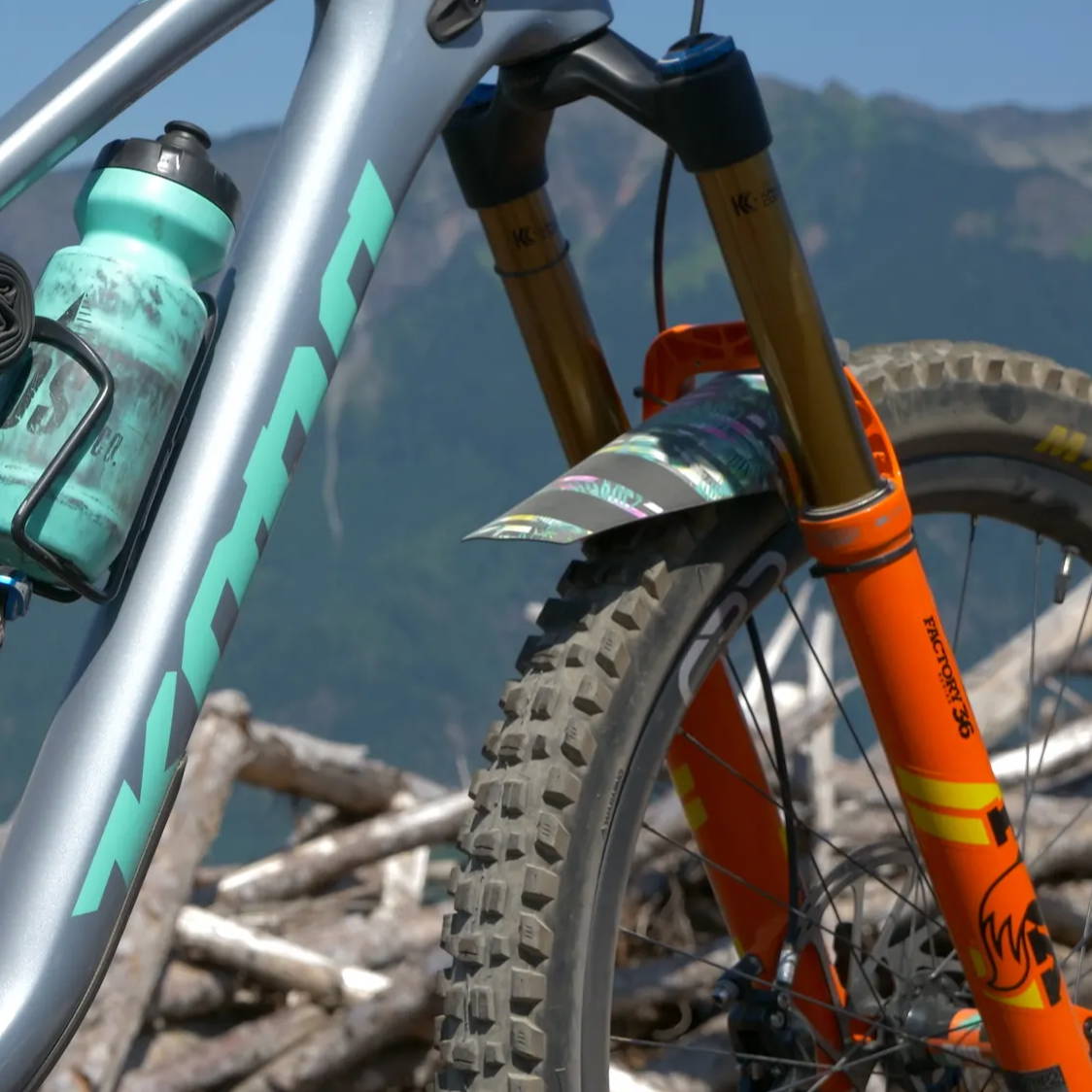 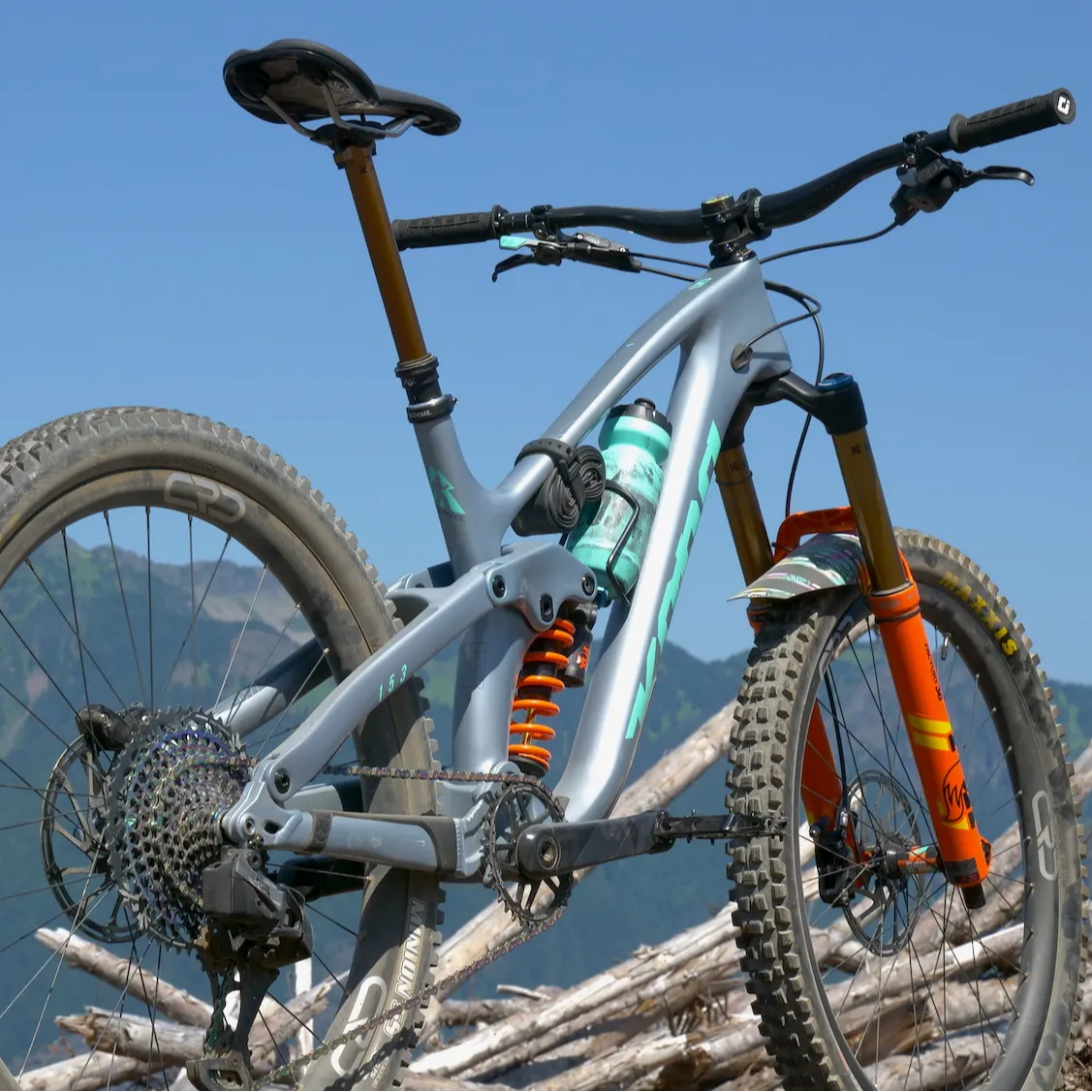 To slow things down, Mike opted for his favorite brakes; the SRAM Code RSC. The rotors are SRAM Centerline with a 200mm disc up front and 180mm in the rear. These brakes seriously stop the bike on a dime which is needed when riding super fast trails in the Whistler Bike Park. Brake levers are attached to a set of CRD Stooge bars, which are carbon and cut down to 780mm and held on by a 35mm long CRD Vagrant stem with rainbow titanium bolts. Mike's hands hold onto a set of ODI Elite Pro grips in black, and the dropper post is actuated using a PNW Components Loam Lever. The dropper post itself is the Fox Factory Transfer Post. Mike was able to just barely squeeze a 175mm dropper post into his Medium Process, which sits exactly at the right height for pedaling. No joke, it's scary how perfect it turned out to be!

Last but not least, Mike hired some little robots to help shift his gears. He chose to run the SRAM XX1 Eagle AXS groupset and is lovin' it! That 12-speed drivetrain is not only electronic, but it's also wireless and shifts extremely crisp. Wireless shifting also means the cockpit is nice and clean, and this bike just straight up looks tidy and simple. The crank is a carbon SRAM XX1 AXS Eagle as well with 170mm crank arms which is attached to a Wolf Tooth Elliptical 32t chainring. Mike freaking loves oval chainrings and won't build a bike without one. To finish off the overall color scheme of the bike, Mike runs a Ground Keeper fender and topcap, both in the matching Staycation design. This keeps mud out of his eyeballs and makes the bike look just a little more baller.

"I had this idea in my head for months, and I was so pumped to finally see it become a bike. It looks and rides better than I could have even imagined!"

PARTS ON THIS BUILD