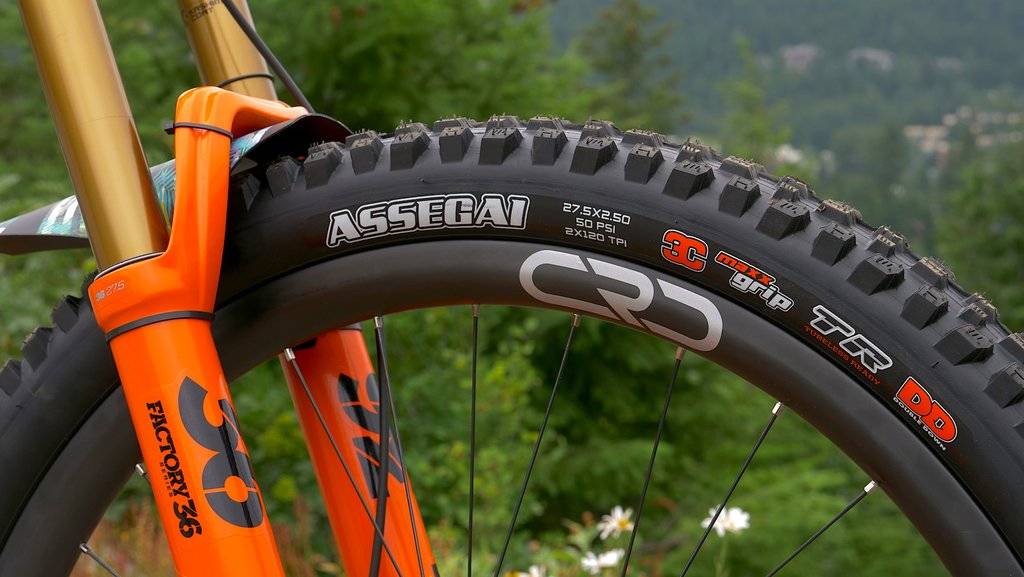 "Not only was I impressed by the grip in general, but also the immense amount of predictability. "

I spent 2 days in the Whistler Bike Park on the July 4th holiday weekend riding with Jason and Russ from the shop. I just built up a brand new custom bike for myself (Kona Process 153 CR DL 27.5) so I was more than excited to go and try out the new setup on my favorite trails in the world.

My new bike was setup with the Maxxis Assegai 2.5" Double-Down MaxxGrip tire in the front, paired with the Maxxis Minion SS 2.3" Double-Down Dual-Compound tire in the rear. The Minion SS is probably the least predictable tire to mostly every rider out there, but I've ridden semi-slicks in all conditions over the past few years and I've grown to love how I can slide the rear end around and pinpoint where my bike goes. I seriously enjoy sliding the tire right into it's side knobs since that's where all the grip is. Semi-slicks have become ultra predictable to me. I feel as if I can corner extremely well with semi-slicks, so I was overly excited to ride Whistler on a fresh rear tire with brand spankin' new side knobs. The rear tire also had a CushCore stuffed in it. 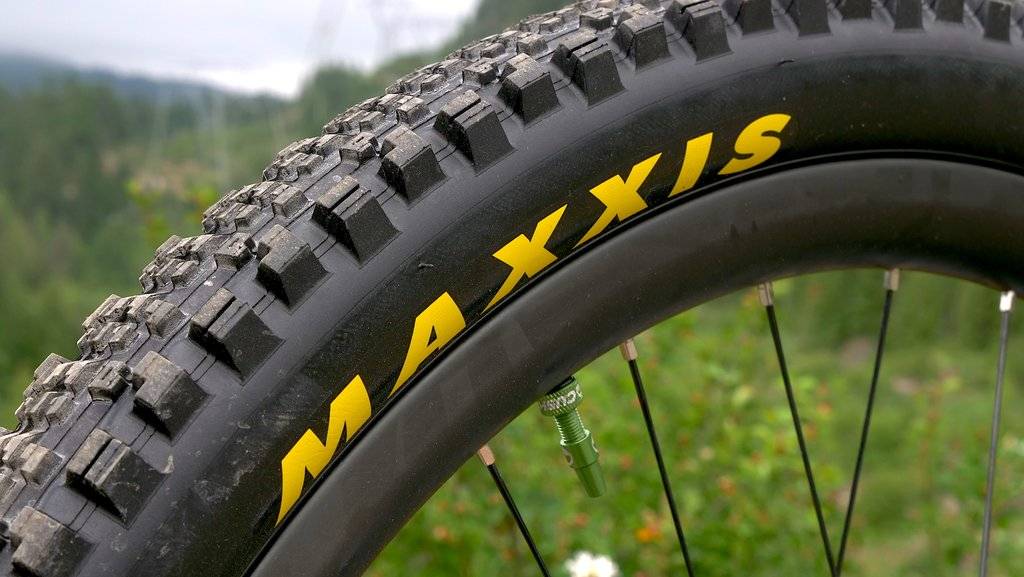 I was also super excited to try the new Assegai up front as our head-mechanic Russ has been stoked on it ever since he put one on his bike a few weeks ago.

This is truly a "business up front, party in the back" tire setup, and I was stoked to see how that business was taken care of by the Assegai.

The first day had the usual July bike-park conditions, with super dry, dusty and slightly blown-out trails. Oddly enough, upper mountain had a few random spots of greasy mud, which had us questioning how weather works. We rode pretty much every trail on the mountain that day, and I immediately felt comfortable with this new Assegai up front.

Dusty berms? Check! We started off by riding Ninja Cougar, which is a trail filled with super tight berms, over and over and over again. Even though this was our warm-up lap, I was immediately warmed up to the Assegai. I already knew how the Minion SS works in dusty corners (they work awesome) but I was unsure how the new Assegai would do. Well, it works awesome as well! I kind of figured that it would, since it's front knobs are super tall in stand in line together, but just after the first trail I was already pumped on how the tire worked. Later on in the day, we of course rode plenty of other trails with huge berms, and the Assegai let me seriously dive right into the corners. I felt as if I've known the tire for longer than 30 minutes!

Dusty rock faces? Check! After the warm-up lap, we hopped on some black tech trails, which are littered with rock slabs. In the summer, these things will get some dust sprinkled on them and become slightly slippery. Luckily, I went with the MaxxGrip rubber compound on the front Assegai. MaxxGrip rubber is the stickiest rubber Maxxis makes, and I would give the MaxxGrip compound the credit for the slick slabs as I'm sure it was mostly the sticky rubber gripping the rocks rather than the Assegai's tread pattern.

Steep, loose gnar? CHECK! After a few laps, we headed straight for our favorite trail in the bike park, Goat's Gully. This trail is an old-school, steep, gnarly tech-trail rated as a double-black diamond. The trail immediately starts with a steep chute covered in sharp rocks which leads you directly into a pincher corner at the bottom to aim the rider right towards the next section of trail. With a MaxxTerra Minion DHF, I typically have to brake quite a bit through the chute so I don't blow the corner at the bottom. Well, with the Assegai I was able to let off the brakes in the chute and then yank them right at the bottom to load my weight into the front tire, where the Assegai held the ground and shot me right into the next section of trail. Was I immediately impressed by this? Yes. Yes I was. Somehow, Goat's Gully had somewhat of a stream running down it at parts, so I got a taste of how the tire worked in mud. HOLY CRAP. The Assegai might have a "digital dirt conditions recognition system" built in, because it transitioned from dry to wet insanely well. More on that later in Day 2.

In regards to rolling speed, it rolls pretty decent! I think it's pretty comparable to a Minion DHF as the lugs are all pretty tightly spaced, but it definitely rolls better than any mud-spike like the Shorty or Magic Mary.

Overall, Day 1 gave me a good feeling of just how much I can trust the front tire. I checked the weather report for the next day, and it was showing rain, so I was pumped to see how the tire setup worked in all-out mud.

On day 1, I was talking to a Whistler local on the chair lift and they said "tomorrow, it's going to be a torrential downpour, so enjoy today as much as possible". I shrugged that off and figured it would just be that misty, PNW rain that I'm so familiar with. Welp, that guy was right, and after getting off of the chair lift for the first lap of the day, it started dumping rain. I then opted to stick to the creekside trails to stay on the enclosed gondolas to avoid getting soaked on the way up and only the rider down.

At the top, I immediately headed towards Delayed Fuse, a black-diamond high-speed tech trail. I've ridden this trail a ton so I know mostly all of the lines by heart, but I've never ridden it in the straight-up mud. Well, the trail was basically a bucket of mud the entire way down, which gave me a great opportunity to really see how well Maxxis was able to create a tire that worked will in all conditions.

The trail immediately begins with a hot mess of intertwined roots and rocks down a slightly turning trail. I dropped in, saw the glistening wet roots and thought to myself, "UH OH". But then, the front tire just grabbed the roots, and I was able to point the front tire where I needed to go while the rear semi-slick just slung itself into whichever direction it needed to go to keep me upright. I quickly hooted and hollered and started riding as fast as I possibly could. My mind was at ease knowing that the Assegai was straight-up there for me the entire way down the trail. I reached the bottom and immediately hopped back on the gondola.

I rode Delayed Fuse several times in a row, and really got used to my new bike on it. Then I learned the most impressive part of this Assegai up front. This trail has a bunch of steep switchbacks which lead you down into the next bench-cut of the trail. Only thing is, switchbacks down steep Whistler terrain means there are a ton of exposed, off-camber roots. In the dry, its easy to maneuver towards the high-line and get on the outside of the trail to more easily drop into the switchback with a more straightforward approach to get to the bottom as quickly and easily as possible. In the rain, this becomes pretty freaking tough. BUT, with the MaxxGrip Assegai, I was able to move from the low-line in the trail, up across the wet and off-camber roots to get up on top of the trail to enter the switchback more easily. "HOLY CRAP" I thought, as just thinking that this is possible is daunting. After getting up on the top of the trail, I would drop into the switchback and flick the front of the bike toward the next section of trail, where the Assegai's side knobs wouldn't let go of the ground and cradled me through the corner.

Next, I rode Insomnia, which is a super high-speed berm trail, which can basically teach you to corner while going fast if you've never done it. It's my go-to trail when wanting to turn fast, so I was stoked to see how the Assegai did on high-speed mud berms. Have you ever eaten natural, creamy peanut butter? Well that was the condition of the dirt down Insomnia. I kept throttling the bike both in and out of corners, which was an absolutely insane feeling! I kept hearing the rear tire rip the corner. How do I type that noise... "schhhhwaaap!"? 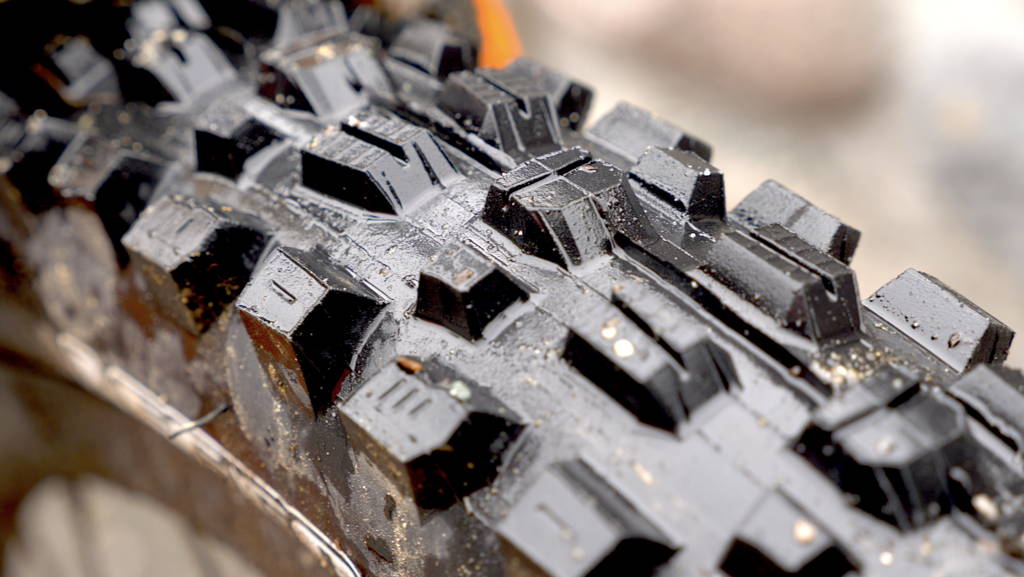 Over, and over, and over again I blasted through the corners and tried to two-wheel drift as much as possible, but the front tire just held it's edge. Riding Insomnia on the Assegai/Minion SS was the most enjoyable setup I've ever experienced in high-speed peanut butter berms. I was trying my best to make the tire lose traction, and I could only do that once when I leaned the bike nearly flat and finally lost traction and slid out. You seriously need to TRY HARD to get the Assegai to lose it's edge.

It was extremely noticeable how much work Maxxis put into making the Assegai work in very-varied trail conditions. Not only was I impressed by the grip in general, but also the immense amount of predictability.

We're overall so happy with the initial and overall awesome-ness of the Assegai, that we placed a big tire order so we can now recommend the Assegai to all customers who are looking for mega grip in the front. The wall is now filled with Assegai's for any rider that like to ride with an aggressive style, and we're pumped on Maxxis' hard work on the new tire! We'll also have a full review out soon once we spend about a month on the Assegai. The only negative thing about the Assegai is that since it's relatively new, Maxxis is still developing different tire compounds with different casing options. We just wish there was a MaxxGrip EXO option for riders that don't live in an area with tons of sharp rocks and want a bit lighter tire. We're sure it'll be available soon, so the MaxxTerra EXO or EXO+ casing will do for now while most trails are nice and dry.