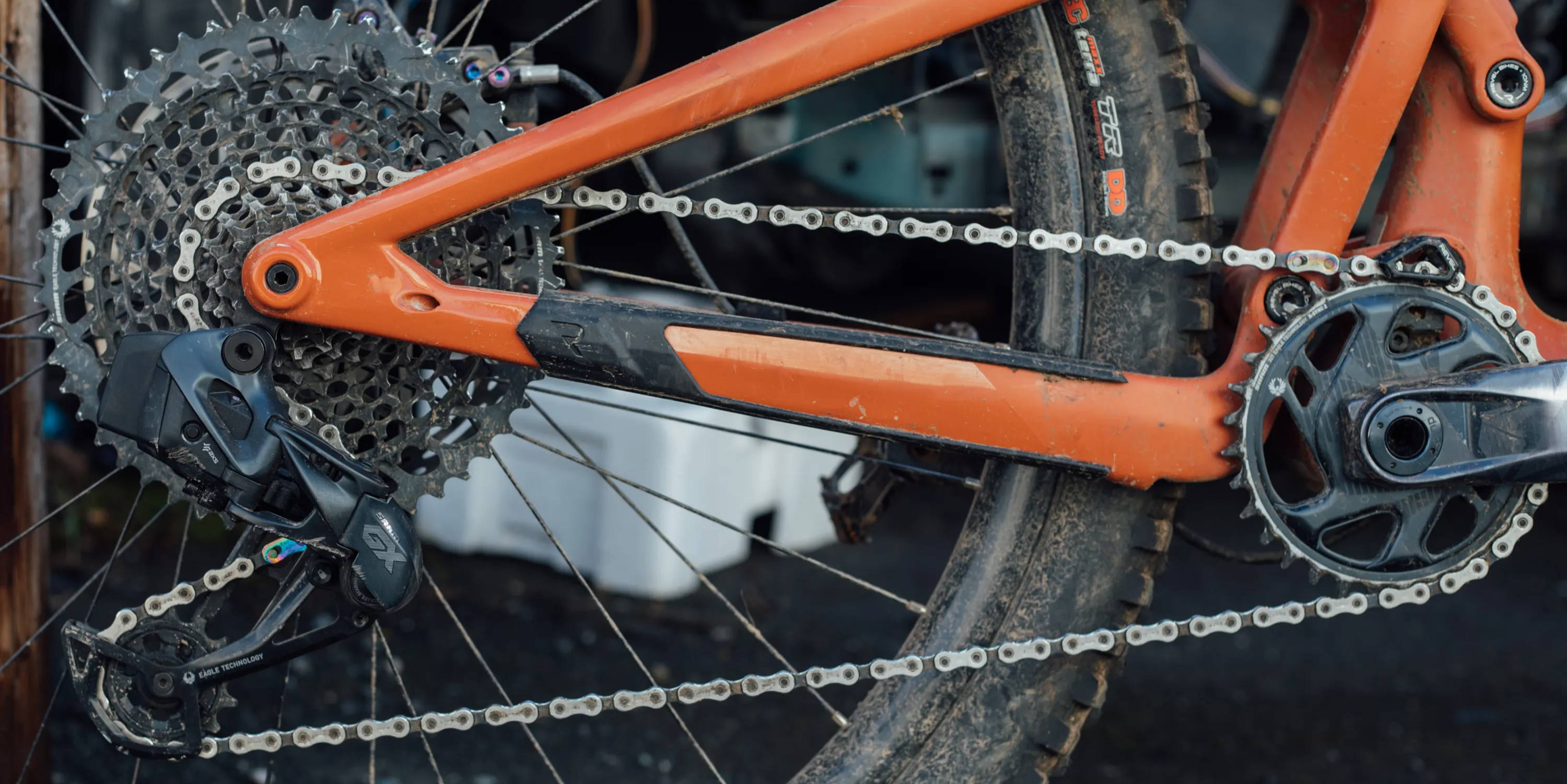 In the winter of 2019, Sram released their ground breaking AXS drivetrain ecosystem with the launch of X01 and XX1 Eagle AXS. However, as the crown jewel of Sram's drivetrain range, the price of both the X01 and XX1 AXS groupsets was prohibitively high for many. While both X01 and XX1 AXS sold exceptionally well and proved plenty reliable, there was a large crowd holding off for the inevitable release of a lower-priced tier of AXS shifting.

In a highly anticipated release this spring, Sram released GX Eagle AXS, or as Sram likes to say: "the best of Eagle."

Sram's newest AXS drivetrain option gives you all the frills of AXS at the cost of a slightly higher weight. Replacing some of the Carbon, Aluminum, and Titanium found on its higher-priced siblings, the GX AXS derailleur utilizes less exotic materials and tips the scales 68g heavier than X01 at 431g. This begs the question, is GX AXS worth it? Read on for my review on GX Eagle AXS...

What Sram has to say:

The day in, day out Eagle ecosystem hero is now available with AXS. New for 2021, The GX AXS upgrade kit is your entry point into wireless drivetrain simplicity. Compatible with any of our Eagle ecosystem cassettes and crank arms, the upgrade kit allows you to experience AXS without needing to buy an entire groupset provided you already are using Eagle products. No matter if you are looking to upgrade your ride, or looking for great value replacement parts, look no further than the GX AXS upgrade kit. 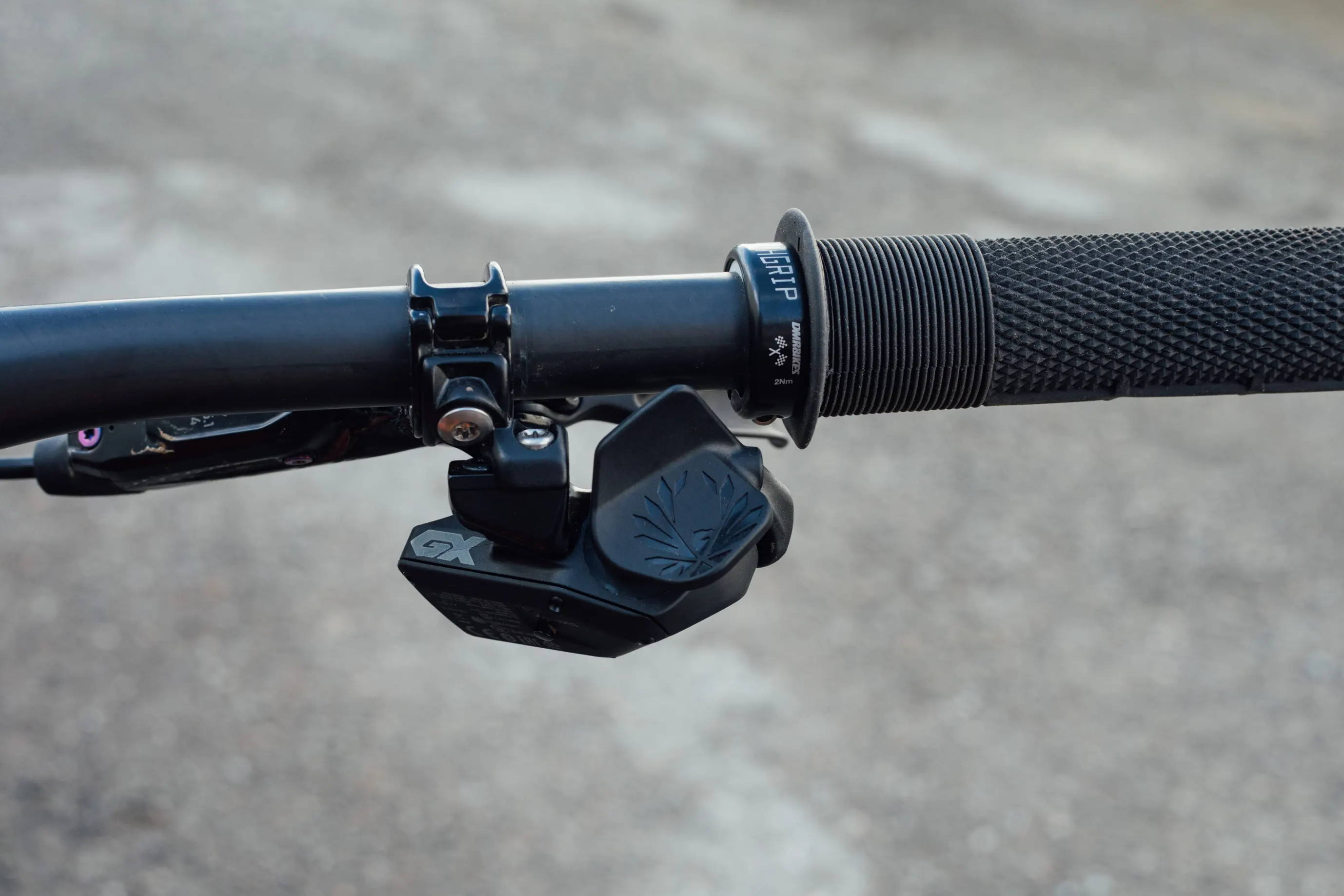 What's in the Box

When you purchase a Sram GX Eagle AXS Upgrade Kit, you're receiving the all-new GX Eagle AXS Derailleur with Battery Cover, GX controller which is basically the same as the existing AXS Controller but with GX branding, and the older style rocker paddle, one AXS battery, charger, b-limit adjustment tool, and a snazzy and surprisingly well-built multitool dawning Sram branding.

Upon picking up the GX Eagle AXS Derailleur, you'll immediately notice it's added heft relative to its more expensive counterparts. When it comes to quality and build, the GX AXS is surprisingly similar to X01 and XX1 but with less exotic materials in order to cut down on costs. One specific part that I was excited to see was the new mounting bolt design on the derailleur. From prior experience, the junction between the hanger and derailleur fixing bolt on analog GX derailleur was a major failing point and developed a large amount of play within a few months of riding.

This is not the case on the new GX AXS which appears to have a new fixing bolt that shares a likeness with X01 and XX1. Thanks, Sram! Adding to that, the build quality of this new drivetrain seems to be very in-step with GX's all-day, every-day, day-in, day-out ethos.

If you've never set up an AXS drivetrain, you're in for a real treat! Setup is an extremely simple and basically just a matter of setting your limits (this is made extremely easy with the included b-limit adjustment tool). For a ridiculously in-depth tutorial on how to get all set up and dialed in, check out the video from Sram below.

I tested my GX AXS on my personal Revel Rascal where I had previously been running X01 with a good ol' cable. The first thing I immediately noticed was how light the shift feel is on AXS compared to a mechanical drivetrain. When shifting, you can't feel the feedback through the lever so it doesn't have that token crisp feeling that Sram is known for... this isn't a bad thing by any means, the GX AXS Eagle probably has the cleanest shift of any drivetrain I've ever run but is just super light feeling.

Under load, uphill, downhill, whatever, GX AXS just shifts and it shifts smoothly. After a few rides to get used to the light shift feel, I found that the AXS offers clean shifts in basically all situations. This is a very subtle improvement on mechanical drivetrains but an improvement nonetheless. Another point of improvement is durability.

After a few weeks of careless riding, the derailleur has seen its fair share of rocks, roots, and dirt and even been bashed a few times. While the derailleur is pretty beat up already, it is still running straight as an arrow and shifting like it was just set up. This is likely in no small part do to the overload clutch mechanism that allows the derailleur to break free and move out of the way upon a heavy hit.

This brings us to one of the largest gripes about previous AXS groupsets....

Prior to GX, if you were to break a derailleur, there was a hefty price for replacement parts. At a minimum, a new X01 derailleur cost $500, or $700 should you want XX1. The release of this GX groupset makes that replacement cost somewhat more stomach-able. Should you bash your GX Eagle AXS Derailleur beyond the point of repair, a replacement is a step closer to the cost of a high end mechanical derailleur at $370. 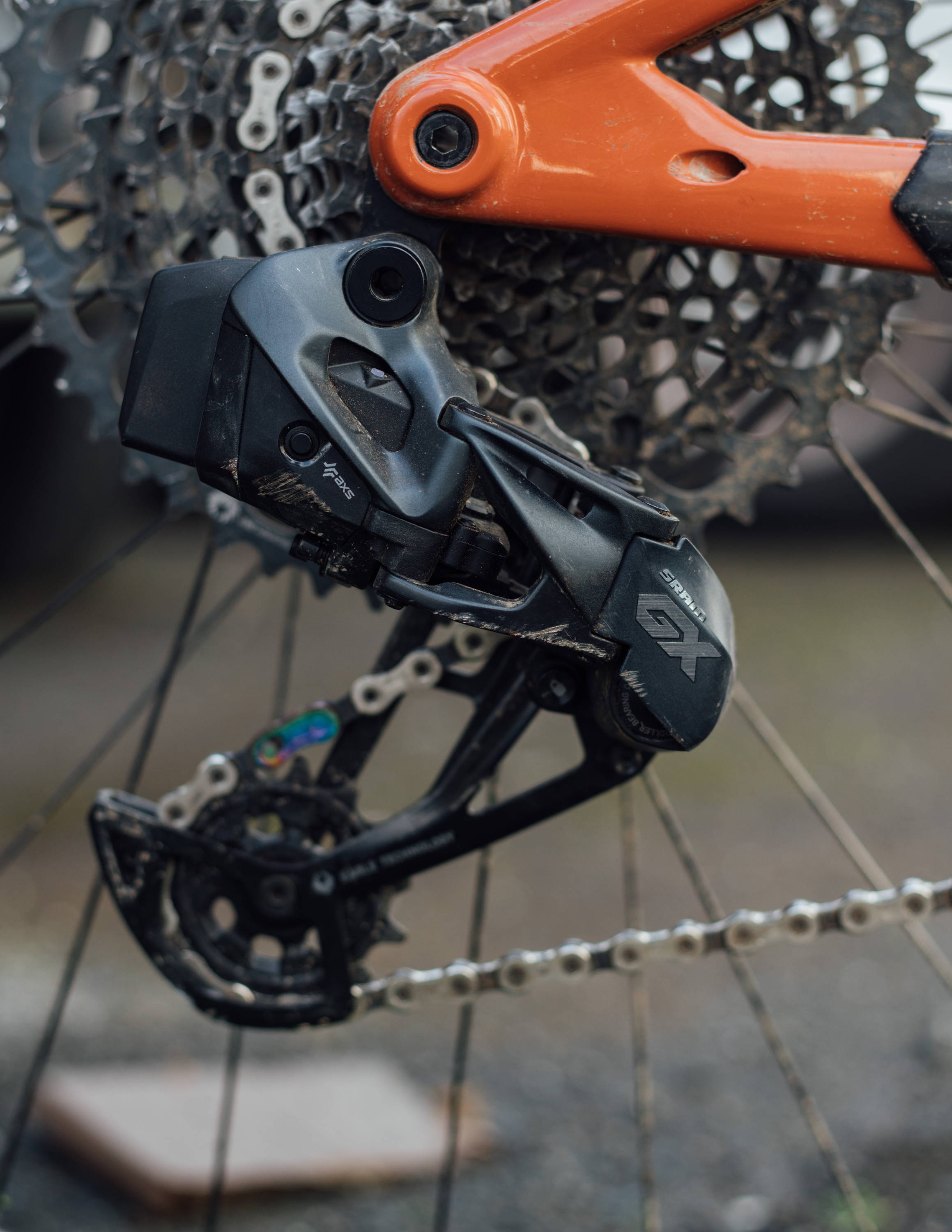 After this initial test period, the only real criticism that I have is with the battery cover. In what seemed like a solution to a problem I'd never personally heard of, the battery cover does exactly what it should do... with one major flaw... It seriously feels like it would fall off at the slightest inkling of contact with a rock or root.

Since all I could see was it becoming trail trash, I simply removed it before riding and set it on the shelf where it will likely never be re-installed. Other than that one super minor nitpick, I have nothing but great things to say about Sram's GX Eagle AXS groupset.

If you have the $600 to shell out on a drivetrain, this is an absolute no-brainer purchase - I can't recommend it enough.

While still clearly somewhat of a luxury item. However, when you really think about it, a full XX1 mechanical drivetrain costs just under $500 so, an additional $100 to get rid of the cable and reap the rewards of wireless shifting is not an unreasonable price to pay. When you look at GX AXS as a high end groupset, it offers tremendous value, especially when compared to X01 and XX1 AXS. While GX AXS is definitely still somewhat of a top shelf item in the bike world, it does make wireless shifting more accessible to the masses, and there's no arguing the value that it presents! 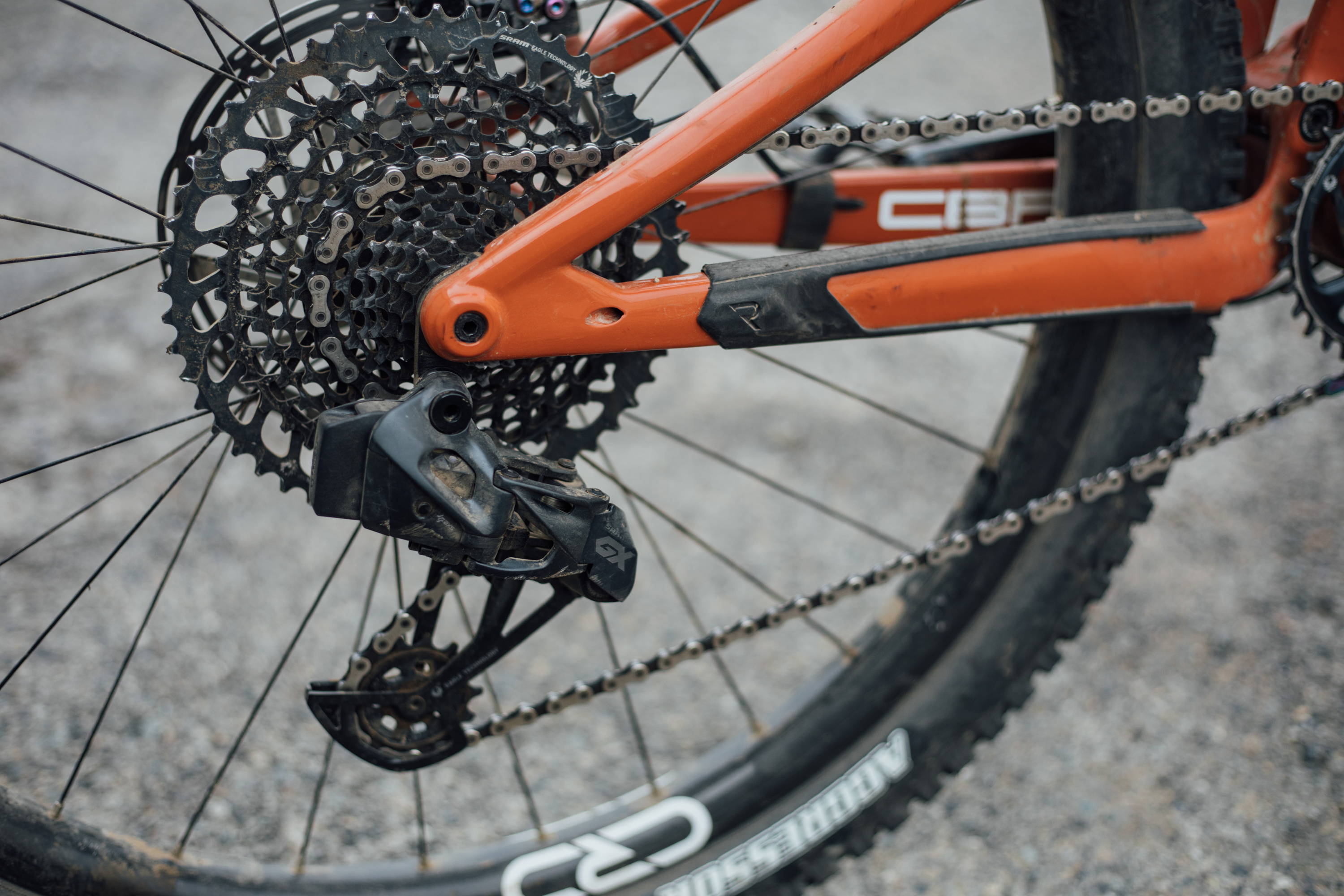 Sold out
Sold out

Got questions? Feel free to shoot us an email or give us a call! 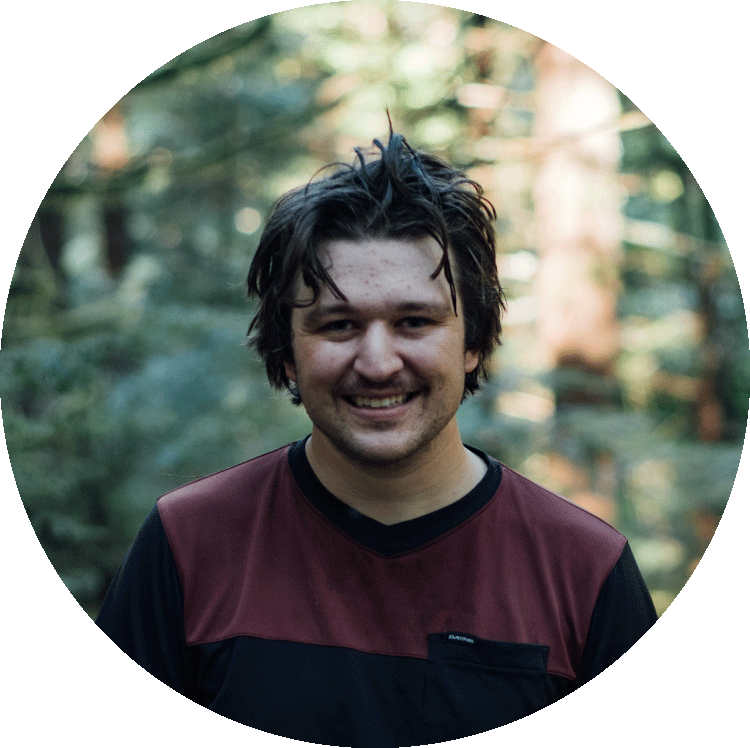 Favorite Trails: HiLine Trail in Sedona and anything with fun rocks and good dirt here in Bellingham!

About Me: Transplanted from New Mexico and Michigan before that, I'm a huge fan of spicy food, chunky trails, and shuttle laps. I dig road trips, finding and riding cool rocks, and spending time outside. I'm a recent convert to the world of mid-travel 29in bikes and love nerding out on bikes and cool bike tech. Want to know where to get the best green chili up here in Bellingham? Hit me up!